June 11, 2021
Trese (stylized as TRESE) is a Netflix animated streaming series developed by Jay Oliva and produced by BASE Entertainment Studios.

It is based on the eponymous comic book series created by author Budjette Tan and artist Kajo Baldisimo, loosely adapting Thirteen Stations and the first three books of the main series.[1] The series follows Alexandra Trese as she protects Manila from supernatural threats, deals with opposing factions and faces a prophetic destiny.

Trese After Dark, an aftershow for the series featuring the creators, showrunners and writers, was released along with the first season.[3]

In the early years of Trese's publication, Budjette Tan was first approached by Tanya Yuson of BASE Entertainment in the interest of an adaptation. She showed interest in local comics and stories that could be pitched, and happened to read and take a liking to the third book, Trese: Mass Murders. She and Shanty Harmayn then shopped the series around different Hollywood directors and studios for eight years.[4]

The series was first announced on November 8, 2018 in See What's Next: Asia, a Netflix showcase held in Marina Bay Sands in Singapore. Jay Oliva was announced as the executive director and showrunner, with Shanty, Tanya and BASE Entertainment Studios as producers.[5] Budjette has confirmed in interviews that the scripts were written by two prominent Filipino scriptwriters.

Jay Oliva and Jojo Aguilar, the latter serving as the art director for the series, scouted Manila to get references for the backgrounds for the series, and met up with Kajo to discuss the art direction of the show.[6] They paid attention to incidental characters as well, going out of their way to give them distinct Filipino features.[7]

The rest of the series' crew were announced on May 21, 2021, with Tanya Yuson, Zig Marasigan and Mihk Vergara as writers and David Hartman, Mel Zwyer and Tim Divar as series directors. Jojo Aguilar was officially announced as production designer and art director with Wil Nichols serving as character designer. Wes Gleason and Rudolf Baldonado handled the casting and voice direction of the English and Filipino voice casts, respectively. Filipino band UDD, formerly known as Up Dharma Down, composed the official soundtrack for Trese, titled “Paagi,” with lyrics by Armi Millare and Paul Yap.[10]

Filipino Americans Sean and Dean Kiner, with involvement from their father Kevin Kiner, were announced as the series' composers on May 21, 2021.[10] They were brought on the project by Dave Hartman, who they previously collaborated with on Transformers: Robots In Disguise.[11]

The soundtrack featured a fusion of pre-colonial Filipino music, modern synthesizers and conventional scoring techniques, as a mix of Filipino and Western influences that the two have. The soundtrack also features recordings of the Ifugao people's Hudhud chants, which the brothers have stumbled upon during their research for the project. Fascinated by the Ifugao, their matrilineal society and it's parallels with the show's strong female protagonist, they sent their cousin Mark Balgos[12] to record a group of Ifugao singers. Some of the traditional songs included are the Dogdowe and the Balluha'd Bayauhen[13], the latter of which became the main theme of the series.

The series' soundtrack along with the rest of the brothers' music is available for listening on the Kiner Brothers' website.

In an interview with the New York Post, Carlos Alazraqui revealed that he was voicing a character for Trese. He explains that he sought help from Filipino dialect coaches.[14]

Two stills from the show featuring Alexandra were debuted as a first look at the series during the Netflix Anime Festival, livestreamed on October 26, 2020.[15] On March 7, 2020, Shay Mitchell and Liza Soberano were both announced as the English and Filipino voices of Alexandra Trese, respectively.[16]

The Free Comic Book Day solicit for the Ablaze edition of Trese Vol. 2: Unreported Murders was released on March 20, 2021. This revealed that the series would be "launching this summer," confirming a summer 2021 release.[17]

A snippet from the series was briefly shown in a Netflix promotion for their anime line-up. The full video was released on April 4, 2021 on the NXonNetflix Twitter account.[18]

On May 19, 2021, Netflix announced that Trese will be released in June 11 of that year.[19] A 12 second clip featuring scenes from the show was included in a video showcase on Netflix's Youtube channel.[20] Kajo also posted a sketch on his Instagram page showing an image of Sinag being used to conduct the Tigil spell on a watch that showed 21 Friday, 9 o'clock, hinting at a possible trailer release date.[21]

On May 21, 2021, the trailer for Trese's Filipino dub was released[23], followed by the Japanese[24] and English trailers[25]. An extensive list of the English and Filipino voice cast was also released, confirming the earlier leaks as well as adding Dante Basco and Manny Jacinto, among others.[26] The hype from the trailer birthed memes such as the "Good Evening, Nuno Meme".

On May 25, 2021, Carl Simon dela Cruz posted the full cast list for the Filipino voice cast on his Facebook page.[27]

Billboards have been set up in various locations in the Philippines as promotion for the series, featuring the taglines "You fear them. They fear her," the English equivalent of the Filipino "Kinakatakutan s'ya ng mga kinakatakutan mo."[28] There were also murals of various supernatural creatures throughout Manila as well as digital advertisements on mobile games. A week later, the billboards were torn and heavily vandalized with red graffiti, written over with the English "This is our city" and the Filipino equivalent, "Siyudad namin 'to." The title for Trese was vandalized with "Layas" on either side, forming the phrase "Layas Trese layas," literally meaning: "Begone, Trese, begone."[29][30] Billboards outside Metro Manila had the vandalized text localized to the languages of the area.

On May 31, hashflags for the series, #TreseOnNetflix and #TabiTabiPo, were accompanied by an Alexandra Trese Emoji on Twitter.[31]

On June 7, 2021, videos in the found footage format surfaced on Twitter[32], Facebook[33], and Reddit[34] showing various aswang, tikbalang and manananggal interacting with the vandalized billboards and posters.

On June 10, 2021, 12:00 A.M., the first four minutes and forty-five seconds of the Filipino dub's first episode was released.[35] The English dub was featured later on the third day of Netflix's Geeked Week, streamed live on their main Youtube channel.[36] The Japanese dub was uploaded on Netflix Anime's Youtube channel some time later.[37]

Globe Poppin' held a quiz night themed around Trese on June 10, 2021, 10 P.M. Philippine Standard Time.[38] A countdown during the last 13 minutes before the premiere, along with a live performance from UDD premiering Paagi, was streamed on Netflix's Facebook page.[39] The performance included the 15 second video submissions from fans using a filter to look like ghosts in a virtual audience.[40]

The June 11 issue of Philippine Star featured a false cover dedicated to Trese. The front had a news report of the dead White Lady of Balete Drive, the spread had a poster of Trese, and the back featured the Nuno. The issue also included an interview with Liza Soberano and an article on Trese written by Kate Heceta.[41] Other newspapers and tabloids also put false covers on their issues on that day and the day after. These headlines are a reference to the sensational headlines tabloids had during the 90's.

On June 11, 2021, 7:20 P.M., Netflix PH tweeted three pictures of ABS-CBN's Eugenio Lopes Junior Communications Center with the logo changed to ABC-ZNN to reference the media company in the show. Awash in a red gradient in various lighting, its prominent lit-up windows spelled TRESE when viewed from the front. The tweet was accompanied by the caption: "Trese has officially taken over ABC-ZNN!!!"[42]

On June 14, 2021, the Ayala-Paseo underpass had an advertisement for Trese showcasing the different mythological creatures shown in the show.[43]

On March 16, 2021, Ablaze released the solicit for their Free Comic Book Day edition of Trese: Unreported Murders promoting the TV show on the cover.[17]

The Avenida editions of Trese: Murder on Balete Drive and Trese: Unreported Murders were branded with a red "Coming to Netflix" sticker in endorsement of the show.

Brawl Quest unveiled an event featuring Trese, which included her as a playable protagonist as well as a small storyline based partly on Trese: Masquerade.

Exclusive merchandise was given as part of Globe Telecom's promotional contest for the series, where fans were invited to repost screenshots of pictures featuring supernatural creatures from the series.[44]

Bloo Prints Designs had a collaboration with Trese that released stickers purchasable through Shopee.[45] 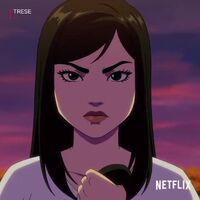 First still from the Anime.

Second still from the Anime. 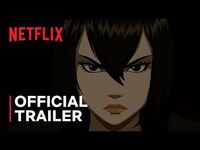