The Tragic Case of Dr. Burgos

The Tragic Case of Dr. Burgos

Our Secret Constellation
The Tragic Case of Dr. Burgos is the third case of the main Trese series and the third of four cases published in Trese: Murder on Balete Drive.

A woman is shown having sex with a man to a radio playing an old song by Sting. She is shown in her last moments sweating and eyes wide open.

Captain Guerrero and Alexandra Trese arrived at the scene shortly afterwards, finding the woman who is now a burnt corpse. Guerrero identified the woman as Susan Bagyo, a woman last seen leaving a party in Makati with an unknown man. The corpse had been found to have burned without damaging anything inside the room, which prompted Guerrero to call for Alexandra's help. After seeing a picture of Bagyo with her cat, Alexandra asked Guerrero's men to search for it, and requested for a candle and for everyone to leave the room.

She lit the candle and dialed the date of the Great Binondo Fire, summoning the Santelmo. The Santelmo determined the cause of death to be eldritch fire from the underworld, used as a medium for a soul sacrifice. Alexandra left to confront her usual suspects for soul trafficking. Bringing the Kambal, she stops by at Vanne's Salon first to interrogate him. Vanne denied any involvement, saying that he has moved on from soul trafficking. Nowadays, he deals in selling years of beauty for a legally transacted price. Even though Alexandra doesn't like his practices, he spills recent rumors of souls being dragged into the underworld, though no level was directly specified. Alexandra left him, claiming that he owes her a favor for not destroying his salon.

They went to Ophelia's Spa, where Oriol the Enchantress practiced sex work. The Kambal waited outside as Alexandra confronted Oriol on her possible involvement in soul trafficking, citing rumors of her father feeding on them for power ever since Alexandra shut down her sister Irago's operation in Pansol. Oriol denied any form of involvement, claiming trafficking souls is unnecessary when they give it up willingly anyway. Alexandra, now out of options, left Oriol and asked the Kambal for Bagyo's cat, who has been shedding in their car.

Alexandra went to Malate church, bringing Bagyo's cat, in order to seek the help of Manang Muning, an old lady who is able to talk and see using cats. Manang Muning complimented the cat and talked with them at Alexandra's behest. After another small compliment, she received the mental image of the suspect's car, which the cat has marked. She telepathically sent the mental image of the car and the cat's marking scent to the cats of the city, until a cat named Percival spotted it parked in the Chancellor Hotel. Alexandra thanked Manang Muning for her help, and paid for her services.

Alexandra and the Kambal trailed the suspect, who was identified as Dr. Karl Burgos from Captain Guerrero running his license plate at the LTO. He has been seen partying ever since his wife died three months ago in a fire, and his misplaced happiness intrigued Alexandra. Basilio followed Dr. Burgos from select vantage points, while Alexandra and Crispin gave chase in a car, following him from the hotel to a party, from which he brought a woman back. The observing parties made a snide remark at the couple having sex, who suddenly ignited, to which the Kambal responded by giving a signal over the phone. The three burst into the room only to find Dr. Burgos and the woman engulfed in flames. Dr. Burgos angrily shouted at them, claiming the six people he burned were soul sacrifices to bring his wife back. The man continued to burn and said Oriol's name out loud in confusion, expecting the resurrection of his wife instead. Shaken, he jumped out the hotel window and into the city, burning the surrounding buildings.

Alexandra rushed to confront Oriol a second time and brought the Kambal with her. She explained that Dr. Burgos went to her for her physical services after being discontented with his wife. At some point, he left Oriol for his wife after realizing he still loved her, telling Oriol he didn't need her anymore. In contempt, Oriol gave him fire from her belly, sourced from the fire of the dark heart of Assu Ang himself. This caused his wife to die by immolation when Dr. Burgos had sex with her, which forced him to come back to Oriol for help. She set up a deal for him to sacrifice six souls, by burning them through sex, to resurrect his wife, who manifested beside Oriol. However, she did not mention the repercussion, that he will continue to burn as long as his love for his wife does not stop. Alexandra, sickened by Oriol's emotional manipulation, ordered the Kambal to shoot at her. Oriol transforms into her true demonic form to confront the gunfire. Confident in her invulnerability to the Kambal's magicks, she is too distracted to stop Alexandra from tearing off one of her claws. Alexandra rebuked her; telling her to go back to her father and warn him of the consequences of letting Oriol repeat her mistakes.

Alexandra then enlisted the help of the Metalero in forging bullets out of the demon's claw, which took him three days. During this, the fire raged on in Cubao while Alexandra took care of Mrs. Burgos. After obtaining the bullets, Alexandra and Mrs. Burgos went to the farthest edge of the raging fire, away from any spectators. Alexandra banked on Mrs. Burgos being able to break her husband's heart, killing the fire inside him. He came out of the fire to come close to her and they talked, though the fire made their words inaudible. She slapped him, but he is still happy that she is alive again. Alexandra pulled Mrs. Burgos away and orders the Kambal to shoot Dr. Burgos with their special bullets.

Alexandra then listened to a band in the Diabolical who were playing the very same Sting song in the beginning, as she watched a candle burn.

The Tragic Case of Dr. Burgos was originally published in ashcan format as the fourth issue in May 2006, preceded by Our Secret Constellation. The order was reversed in the collection Trese: Murder in Balete Drive published by Visprint in 2008.

The following are a list of the different solo publications and collections that include Trese Case 3. 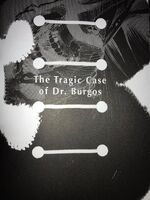 Chapter art of Case 3 from Trese: Book of Murders.

Cover of the Filipino translated Trese Case 3. This version was translated by Bob Ong. 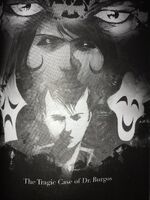 Chapter art of Case 3 in the 2020 Ablaze edition of Trese 1: Murder on Balete Drive.