The Tragic Case of Dr. Burgos
Rules of the Race is the second case in the main Trese series, and the second of four cases published in Trese: Murder on Balete Drive.

Albert Morales participated in an illegal drag race, and eventually faced an unknown challenger. He took the lead early in the race, but the challenger suddenly burst forward with unnatural speed which took Albert by surprise, and won by a wide margin. Albert, who had responded to the challenger by spurring his car to an uncontrollable speed, crashed into a pole head on. The challenger reflected on his easy victory, hoping for a stronger opponent.

Captain Guerrero and Sergeant Tapia arrived at the scene and called Alexandra Trese for assistance. He explained to her that this was the third drag racing accident in the past month, and that Albert was in critical condition at Medical City. The opponent was seen driving back and picking up Albert's girlfriend Katya Sanchez. Guerrero suspected kidnapping, especially after her parents could not reach her phone. He pointed out strange indentations found on the car and in the surrounding area and speculates that it might be a new gang's trademark, but Alexandra disagreed.

Alexandra went to the local driving scene to investigate, posing as a potential better. After asking the Kambal to step aside to buy her espresso, she asked around for any information about the mysterious challenger. People described his black car inconsistently: a Mazda, a BMW, a Civic. They told her that he always showed up a little before 3 A.M. to challenge the previous winner. The Kambal returned without Alexandra’s espresso, but with them came Hannah and Ammie, wind-people from the Habagat and Amihan Tribes, respectively. The two had come to the place two weeks ago chasing rumors of this mysterious racer, as they were attracted by his agility. Their description of him led Alexandra to believe that he could possibly be a tikbalang.

With her new lead, Alexandra headed to Armanaz Tower, going up to the penthouse to see "Old Man Armanaz" himself. The secretary tried to trick her, but Alexandra saw right through the bluff. Mr. Armanaz III and his bodyguards appeared and continued to deny her entrance. They eventually let her in when she threatened violence with the Kambal posted outside the window.

She entered the penthouse, facing Señor Armanaz. He pointed out that her father wasn't a good friend to him, and she argued that her grandfather was. She then notified Armanaz that one of his tribesmen may have broken the Pact by mingling with normal people, implying that the mysterious racer is a member of his tribe. She indicated the marks left behind at the incident—hoof marks made by a tikbalang. She recalled her grandfather’s words about tikbalang colts having a strong need to prove their speed, which could be the motivation for racing against sports cars. Armanaz wanted the matter to stay within his herd, but Alexandra insisted on making sure that the incident would not happen again, and cited the Bukidnon Massacre. She also pointed out that colts take trophies of their victories, and that Katya might have been taken as one. Due to her persistence and a promise to "tame" the wayward tikbalang, Armanaz relented and gave her a name: Maliksi, a colt that has been missing for a month.

A week later, Alexandra asked Hannah and Ammie for a favor hours before confronting Maliksi He challenged her to a race, and she goaded him into agreeing to granting her three wishes if she won. The race ensued, and as they neared the finish line, Alexandra glanced at Maliksi's car, cutting through the glamour, and seeing Maliksi and his black car in their true form—a tikbalang. He then sprinted further in a sudden burst of speed, similar to the one he employed against Albert. Alexandra, timing it at the last possible moment, called for Hannah and Ammie. They pushed Alexandra's car, using their abilities as wind-people in a final burst of speed towards the finish line.

Maliksi, frustrated at losing, poundsed Alexandra’s car with his hooves, destroying the hood. Alexandra stepped out and declared that he is duty-bound as a tikbalang to fulfill her three wishes. Maliksi insisted that she cheated, to which she pointed out that she only used magic because he was a being of magic abusing his power as well.

Captain Guerrero comes to the scene hours later as Alexandra's wrecked car is being towed. He informed her that Katya appeared in her bedroom with no memory of her disappearance, and that Albert has made a speedy recovery. Guerrero asked her for an explanation of the sudden events. She left him clueless and caught up with the Kambal, off to buy Hannah and Ammie some fraps and to collect on the espresso they forgot.

Rules of the Race is the second issue of Trese originally planned for release in December 2005 but was released January 2006. The following is a list of the different solo publications and collections that include Trese Case 2: 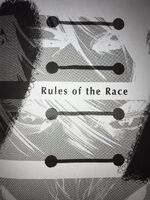 Chapter art of Case 2 in Trese: Book of Murders.

Cover of the Filipino translated Trese Case 2. This version was translated by Bob Ong. 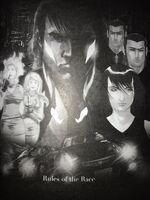 Chapter art of Case 2 in the 2020 Ablaze edition of Trese: Murder on Balete Drive.