At the Intersection of Balete and 13th Street is the first case of the main Trese series and the first of four cases published in Trese: Murder on Balete Drive.

A white lady is run over by a car at the intersection of Balete and 13th Street. Her body is found to be encircled with an unusual white powder.

Captain Guerrero enlists the help of Alexandra Trese, who follows the trail of evidence. Aided by the Kambal, she ventures into the inner circles of Manila's Underworld to uncover a darker mystery at its center.

Captain Guerrero and Sergeant Tapia responded to a car accident at the intersection of Balete and 13th Street, where a woman in a white dress had been run over by a distraught driver. Tapia asked if the body could be taken away after evidence collection by SOCO, but Guerrero insisted on waiting for Alexandra Trese to arrive. Upon her arrival, Alexandra made a remark regarding the irony of seeing a white lady dead on that particular street. Guerrero noted that neighbors have identified the victim as Gina Santos, a person who died years prior during the 1960s. Alexandra observed the white powder surrounding the corpse and discovered that it is salty.

In her quest to seek more information, Alexandra visited the nearest mound to consult a nuno, saying "Tabi tabi po." She is instead greeted by a nuno living under a manhole nearby. The nuno explained that nobody lived in the mound anymore on account of the garbage. Alexandra introduced herself and the nuno recognized her as Anton Trese's daughter. The nuno was hesitant to speak of the incident, but was willing to divulge that the white powder was made up of finely ground mermaid bones. They remarked that this is a medium for trapping spirits, more potent than iodized salt, and that they don't know where it specifically came from. The nuno advised Alexandra to start looking near the sea and warned her to be careful.

Alexandra first spoke with Aling Terrie in Quiapo. Her search led her through Chinatown and eventually to the pier, winding up at a bar called the Trident and came to the conclusion that it was the aswang-run establishment her father had once told her about. When the hostess approached her, she directly asked for mermaid bones. After a whispered consultation with the bartender, the hostess told Alexandra that the manager would meet her in the back. She was greeted by the aswang leader and his goons. He taunted her, saying that they weren't afraid of her because she is nothing like her father, to which she threatened to call her boys. The leader refused to back down, and the Kambal came, to the surprise of the aswang, who then transformed. They introduced themselves as the Sibat, a powerful clan of hunting aswang, to threaten her. A huge fight ensued, during which Alexandra gained the upper hand and pursued the fleeing leader.

Cornered and restrained, the aswang leader confessed that an anonymous woman bought the mermaid bones a month ago and offered her firstborn child as payment. Upon finding out that the aswang ate the four-month-old baby, Alexandra angrily struck the leader and stabbed his eyeball with the Sinag. She pulled out the eyeball, dropping it into a glass of water as she uttered an ancient chant. The image of the buyer was reflected in the water. She left the leader alive after telling him that she was nothing like her father.

Alexandra called Captain Guerrero and asked him to look into recent reports of kidnapped or missing babies three to four months old. After sketching the buyer’s image, she told the captain to cross reference names with New Manila residents, specifically with women on Balete Drive, and added that she would be sending him a sketch of a possible person of interest.

Guerrero and Alexandra arrived at the house of Ms. De La Rosa, a resident of Balete Drive. They confirmed that she was the buyer of the mermaid bones. Confronted by Guerrero and Alexandra, Miss De La Rosa revealed that, when she was three months pregnant, she and her partner Herbert Tomas eloped to escape her disapproving parents. As Herbert was checking the rearview mirror to see if her father had pursued them, a lady appeared in front of the car, so she tried to steer it away. This resulted in an accident that killed Herbert but spared her and her child. No one believed her about the lady because there was no second body. She figured out that the lady was actually a ghost after seeing her again in the corner of Balete and 13th Street. She asked around and eventually found her way to the Trident, where she traded her own child for the mermaid bones that she needed for her revenge.

Guerrero and Alexandra left the house, realizing that they could not arrest her for a death that happened in the '60s. Guerrero said that she can still be brought in for selling her son in exchange for mermaid bones, which he planned to explain in court as some sort of new drug. He asked Alexandra to keep an eye on De La Rosa since he still needed a warrant of arrest. She warned him that the underworld will seek balance in its own way, making Guerrero recall her father's foreboding way of talking about the underworld and how it used to stop him from asking questions.

Later that midnight, a storm came and broke an electrical line, causing a sudden fire to engulf De La Rosa's home. Guerrero and Alexandra headed to the residence, where firefighters were found to be too late in saving the woman. Guerrero recalled Alexandra's earlier comment on the karmic nature of the underworld, and she interrupted with information about Gina Santos. She revealed that Santos died in a car accident in 1963 while standing at the corner, waiting for her lover. Guerrero and Alexandra reflected on the lengths people go to for love and how it often extracts a price. Alexandra caught a glimpse of De La Rosa, now a spirit standing in the very corner where Santos used to be, who then dissipates into the night.

The story was first released as ashcan comics sold in Comic Quest, Megamall, in 2005. A total of 30 copies for the first printing were sold out after a week.

The following is a list of solo publications and collections that include Trese case 1:

Original ashcan version cover of Trese Case 1: At the Intersection of Balete and 13th Street released in November 2005. 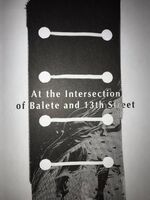 Chapter art of Case 1 from Trese: Book of Murders.

Cover of the Filipino translated Trese Case 1: At the Intersection of Balete and 13th Street. This version was translated by Bob Ong.

Cover of Trese Case 1 Global Edition, released through Indiegogo, and Anniversary editions released exclusively by Filbar's and Comic Odyssey in 2019. 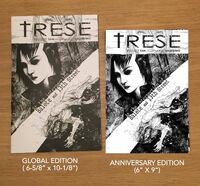 Comparison of "Trese: At the Intersection of Balete and 13th Street" global edition and anniversary edition.

Chapter art of Case 1 in the 2020 Ablaze edition of Trese 1: Murder on Balete Drive.